Ductility denotes an ability of a building structure to undergo significant deformations before the failure occurs in structural members or their connections. These large deformations (usually referred to as plastic or inelastic deformations) are accompanied by damage in some of the structural components. Structures which show ductile performance may experience permanent deformations after a major earthquake.

According to the conventional seismic design approach, buildings are designed for ductile performance. Alternatively, a building can be equipped with base isolation and/or energy dissipation devices. The objective of this approach is to avoid damage in structural components and building content in case of a major earthquake. 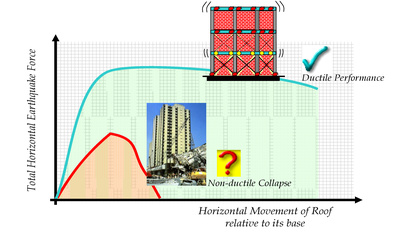