The structure incorporates ductile design, where steel members or reinforcing are designed to undergo plastic deformation in over-load situations before failure under earthquake loads occurs in structural members or their connections. Provision of ductility is achieved by both providing a hierarchy of member strengths in a structural system (known as Capacity Design Approach) as well as special member detailing. For example, ductile moment frames will have columns stronger than the beams and shear force detailing will prevent shear failures of both beams and columns occurring before flexural yielding.

The main objective of the Capacity Design Approach is to ensure that buildings perform in a ductile manner, that is, to avoid brittle failure and collapse in earthquakes. The designer needs to select structural components in which extensive deformation and damage may be expected, while the remaining portion of the structure must remain strong enough, or flexible enough, to sustain these forces and deformations. This is can be explained on an example of a chain, where ductile links represent locations at which significant plastic deformations are expected (ductile links), while brittle links represent other structural components. For example, in a reinforced concrete frame extensive deformations are expected in the beams (analogous to ductile links), while columns need to remain strong (analogous to brittle links) (illustration by C.V.R. Murty, Earthquake Tip 9, NICEE, India)

One of the design requirements for ductile performance of reinforced concrete moment frames is to ensure Strong Column-Weak Beam design concept - beams must be the weakest links (C.V.R. Murty, Earthquake Tip 9, NICEE, India)

Plastic hinges (shown in red colour) are locations in a reinforced concrete or steel moment frame system where significant deformations and damage are expected to take place during a major earthquake (FEMA 451B, 2006) 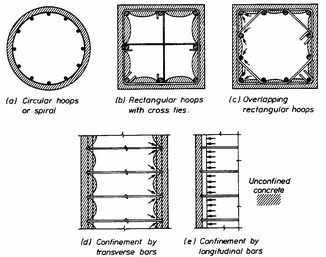 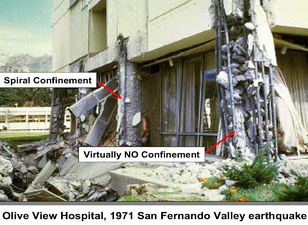 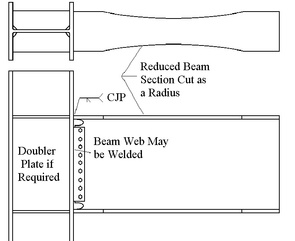 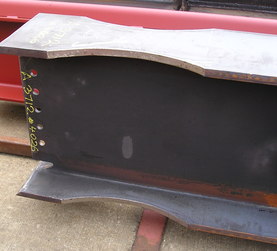 Ductile behaviour of steel moment frame structures can be achieved using Reduced Beam Section (also known as dogbone connection). The dogbone connection consists of trimming a portion of the steel beam flange in the region adjacent to the beam-to-column connection; this type of connection acts as a ductile fuse, and it forces yielding to occur within  the reduced section of the beam; see an I-shaped beam with dogbone connection ready for the construction, Canada (drawing: FEMA 355D, photo: S. Brzev) 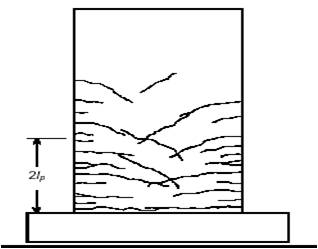